All BOOKS FOR PURCHASE

Due to advancing years we regret to announce that we can no longer offer book sales via the internet. However, many of our publications are available at sales@diandsaulbooks.co.uk, on e-bay, or on other websites. If you have difficulty in finding the book you want please do contact us and we will do all we can to help.
We would like to thank all those who have purchased our publications over the years
Downloadable order form 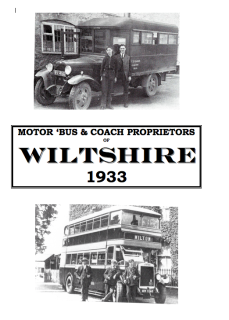 Motor 'Bus & Coach Proprietors of Wiltshire
A pen picture of all services in Wiltshire, including  current fleets, at the end of that year.

£
7.00
ARE WE ALL HERE?
Early public transport to the south of Helston 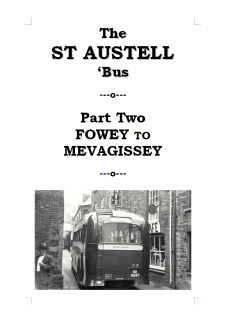 “Beside its main job of taking barrels and boxes of crabs lobsters and wet fish to the station, it was fitted for use as a coal lorry, a cattle transport, an ‘errand’ lorry and, incredibly, a passenger vehicle”. 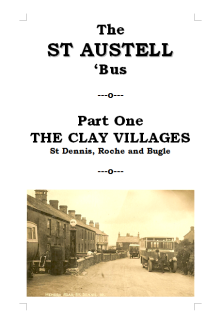 “not only looked after his passengers, he took care of his employees. His wife provided “crib” (refreshments) for staff during the day and on Saturday nights, when the ‘buses were out until nearly midnight, she waited up with wage packets and had a cooked meal ready for them to eat before they went home”. 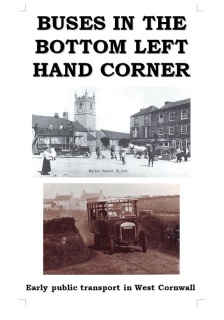 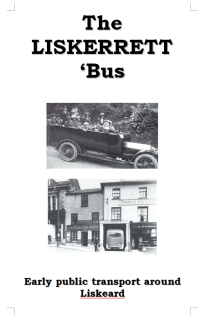 The Liskerret 'Bus
A history of the  early public transport around Liskeard
£
7.00

Cornwall : Narrow Streets and Twisting Lanes -
150 years of travel from Looe, Polperro and Pelynt including the stories of the well known Pearce’s Motors of Polperro and the much missed Hamblys of Kernow. 38 photos plus illustrations, maps, timetables and vehicle details
£
6.00

Cornwall : By Bus and Boat to Rame -
Public transport on, to and from the Rame peninsula of Cornwall, covering the fishing villages of Cawsand and Kingsand and the larger settlement of Millbrook. Includes Millbrook Steamboat & trading Company.  Now re-published as a single A4 volume.
£
6.00

Cornwall : Buses round the Camel -
Early public transport in the area bounded by the River Camel and the north coast of Cornwall including the stories of Blakes of Delabole, W.A.Hawkey of Wadebridge, Prout Brothers of Port Isaac. 40 photos plus illustrations, maps timetables and vehicle details.
£
6.00

BY HORSE AND MOTOR TO LANSON-
Early public transport in the Launceston area of Cornwall
£
6.00

PROUT OF PORT ISAAC, A Pictorial History-
Supplements the chapter on Prouts in ‘Buses Round the Camel’ with more than 30 pictures
£
4.00

TRAVELLING TO TRURO- Parts One
The carriers and early motor bus operators who ran to Truro
£
6.00

TRAVELLING TO TRURO- Part Two
The carriers and early motor bus operators who ran to Truro
£
6.00

TRAVELLING TO TRURO- Part Three
The carriers and early motor bus operators who ran to Truro
£
6.00

HAVE THEY FIXED THE WHERE AND WHEN?-
Penryn & Falmouth from the middle of the 19th century to 1973 when the last local proprietor sold out
£
6.00 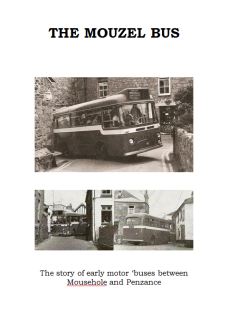 THE MOUZEL BUS-
Public transport around Mousehole from World War I until the 1980’s.
£
5.00 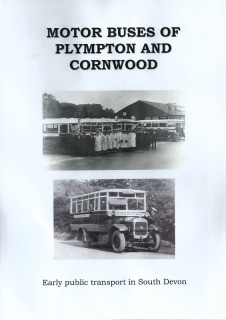 NEW!!! Motor Buses of Plympton & Cornwood
The latest publication about the history of public transport in the Plympton and Cornwood areas.
£
6.00 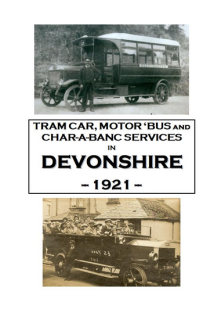 Tram Car, Motor 'Bus and Char-a-Banc Services in Devonshire 1921
A unique survey of the early days of motor transport at a moment in time with pen pictures of over 300 operators, plus details of nearly 600 motor vehicles (of 60 different makes), 177 trams and 187 motor and tram services. 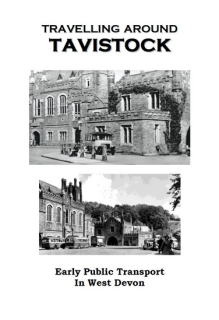 Travelling around Tavistock
The story of public transport in West Devon in the early twentieth century. Although based on our booklet “Between the Tamar and the Tavy”, published many years ago, this is a greatly expanded publication that also embraces Bere Alston, Princetown, Yelverton etc (including the story of Sleeps and Digony Trathen – whose surname was to become famous). 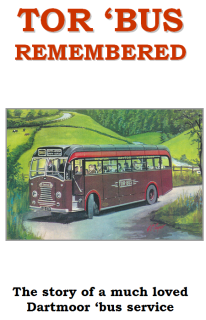 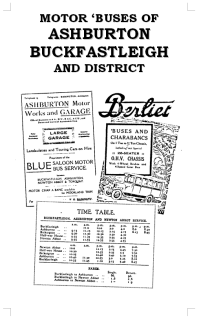 Originally published as Motor ‘Buses of Ashburton, Buckfastleigh and Holne in the 1990’s, it has now been re-written to include new information and extended to include Rattery and South Brent.38 pages A4.
£
6.00 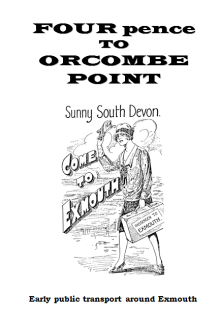 NEW!!!FOUR PENCE TO ORCOMBE POINT
The story of early public transport around Exmouth is a tragedy of several parts. But not all was doom and gloom. Read about the development of Arcadia, Blue ‘Bus Service, Enterprise, Harris’s, Millers, Payns, Burbury’s Royal Blue and others. Motor Trams and Toast-racks along the sea front and passengers like Mrs Push-Shovey.
£
7.00 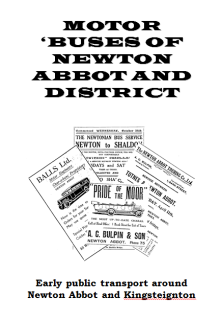 NEW!!!MOTOR ‘BUSES OF NEWTON ABBOT & DISTRICT
First published in the 1990’s, now in a revised edition, we tell the story from the steam ‘buses of 1911 through the 1920’s when competition led to a fare of 1d (one old penny) between Newton Abbot and Kingsteignton. Includes the little Blue ‘Bus, Newtonian, Pride of the Moor, Speedwell and others.
£
6.00 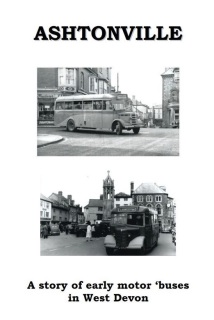 ASHTONVILLE
Second (revised) edition. The story of a pioneer Devon country ‘bus proprietor, Norman Ashton of Halwill, as  recalled through his staff, passengers and contemporary accounts. Now includes details and fleet lists for two other local operators in the 1920’s.
£
6.00 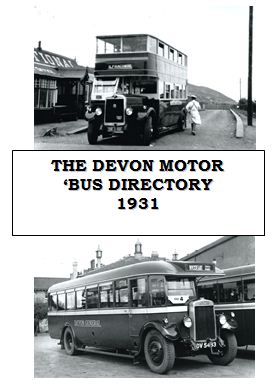 THE DEVON MOTOR ‘BUS DIRECTORY 1931
Motor ‘bus and tramway services in Devon in the period just before the introduction of licencing under the Road Traffic Act, 1930. Includes all routes operated by Devon General, Western & Southern National, the Corporations of Exeter and Plymouth and the many independent operators, also fleet lists for all the above except Western & Southern National.  64 pages, some 50 pictures of vehicles in service in 1931, maps, etc.
£
7.00 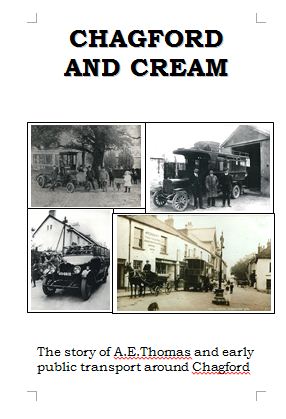 CHAGFORD AND CREAM
The story of A.E. Thomas who moved from Witheridge to Chagford to take over a motor ‘bus and coach business, also other operators in that area including the London & South Western and Great Western Railways. After the Second World War Mr Thomas bought a coach firm in Torquay and we tell the story of his time in that resort.    46 pages, 21 picture, maps, timetables, etc.
£
6.00

RAMBLER REMEMBERED-
The story of Stan Wakley of Membury and Axminster
£
5.00

HUNDREDS OF ROOM-
Early public transport in the Clovelly and Hartland area
£
6.00

UP OVER AND DOWN THROUGH-
Covering Seaton, Beer & Branscombe – Pioneer, The Doves, Comfort Coaches, Silver Cars, etc
£
6.00

TWIN PEAKS AND TOASTRACKS-
The story of the Sidmouth Motor Company and Dagworthy
£
6.00

THE BUDLEIGH ‘BUS-
An updated version covering the competition between Hart’s Services and Devon General
£
6.00

BYGONE ‘BUSES OF PLYMSTOCK AND YEALMPTON-
£
5.00

ALL ABOARD THE SKYLARK
Early public transport south of Salisbury
£
7.00

CHALK IN THE RADIATOR- Part one
Part One (Upper Avon Valley) Covers the 30 operators based in the area between Upavon and the Woodford Valley
£
5.00

100 YEARS OF TRAVEL FROM MAIDEN BRADLEY-
The story of Leather’s Coaches and other operators in the district.
£
6.00

ALONG THE DUSTY ROAD, Part I-
The carriers and early motor ‘bus operators who ran to Dorchester before 1939
£
6.00

ALONG THE DUSTY ROAD, Part II-
The carriers and early motor ‘bus operators who ran to Dorchester before 1939
£
6.00

ALONG THE DUSTY ROAD, Part III-
The carriers and early motor ‘bus operators who ran to Dorchester before 1939
£
6.00

ALONG THE DUSTY ROAD, Part IV-
The carriers and early motor ‘bus operators who ran to Dorchester before 1939
£
6.00

'BUSES WEST OF THE QUANTOCKS
A look at the many operators running between Taunton and Watchet between 1919 and 1952. 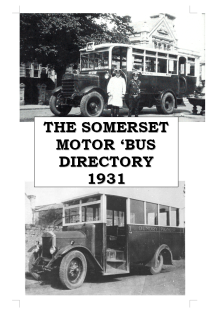 NEW!!!!MOTOR ‘BUS DIRECTORY OF SOMERSET 1931
A look at motor ‘bus and tramcar services at a time before private motor car ownership became widespread. Included is a description of the development of services in the county and pen pictures of many proprietors, together with lists of services (including Bath Tramways Motor Co., Bristol Tramways, Great Western Railway, Western and Southern National) together with details of vehicles owned at the start of that year, many maps and photographs. 66 pages A4.
£
7.00

HATS OFF TO THE PAST-
Early public transport in the Crewkerne, Axminster and Bridport area
£
5.00